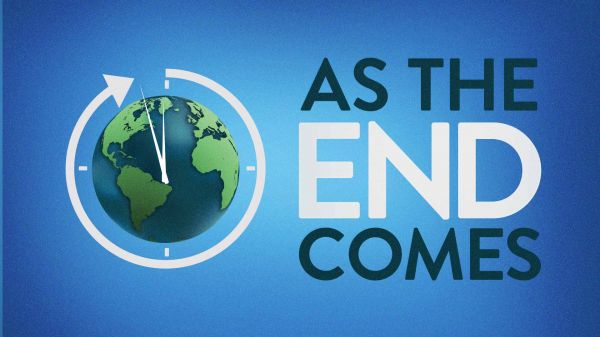 AS THE END COMES – 2 THESSALONIANS

Matthew 26:64 …But I say to all of you: In the future you will see the Son of Man sitting at the right hand of the Mighty One and coming on the clouds of heaven. (Jesus)

Matthew 24:27 For as lightning that comes from the east is visible even in the west, so will be the coming of the Son of Man. (Jesus)

Luke 12:40 You also must be ready, because the Son of Man will come at an hour when you do not expect Him. (Jesus)

2 Thessalonians 2:8 And then the lawless one will be revealed, whom the Lord Jesus will overthrow with the breath of His mouth and destroy by THE SPLENDOR OF HIS COMING. (NIV)

B. Revelation 1:7 Behold, He is coming with the clouds, and every eye will see Him, even those who pierced Him; and all the tribes of the earth will mourn over Him. Even so. Amen.

C. Jesus comes out of heaven as a conqueror.

Revelation 19:11 I saw heaven standing open and there before me was a white horse, whose rider is called Faithful and True.

2 Peter 3:3-4, 8-10 First, I want to remind you that in the last days there will be scoffers who will laugh at the truth and do every evil thing they desire. 4 This will be their argument: “Jesus promised to come back, did He? Then where is He? Why, as far back as anyone can remember, everything has remained exactly the same since the world was first created.” 8 But you must not forget, dear friends, that a day is like a thousand years to the Lord, and a thousand years is like a day. 9 The Lord isn’t really being slow about His promise to return, as some people think. No, He is being patient for your sake. He does not want anyone to perish, so He is giving more time for everyone to repent. 10 But the day of the Lord will come as unexpectedly as a thief…

E. Jesus is coming as a righteous judge.

Acts 17:31 For He (God) has set a day when He will judge the world with justice by the man He has appointed. He has given proof of this to all men by raising Him from the dead.

F. He comes ready to place all things under His feet.

1. Ephesians 1:20-22 is speaking of God’s power demonstrated in Christ “… when He raised Him from the dead, and seated Him at His right hand in the heavenly places, 21 far above all rule and authority and power and dominion, and every name that is named, not only in this age, but also in the one to come. 22 And He put all things in subjection under His feet…

G. He comes as God in flesh.

2. Revelation 19:16 On His robe and on His thigh He has this name written: King of Kings and Lord of Lords.

2. WHEN CHRIST RETURNS, WHAT WILL HAPPEN?

A. First, all believers who are already in heaven will come back with Him at His Second Coming.

1. Revelation 19:14 The armies of heaven were following Him, riding on white horses and dressed in fine linen, white and clean.

2. Revelation 19:7-8 Let us rejoice and be glad and give Him glory! For the wedding of the Lamb has come, and His bride has made herself ready. 8 Fine linen, bright and clean, was given her to wear. (Fine linen stands for the righteous acts of the saints.)

3. Mark 14:25 I tell you the truth, I will not drink again of the fruit of the wine until that day when I drink it anew in the kingdom of God.

B. Second, creation will respond to its Creator’s coming.

1. Matthew 24:29 Immediately after the distress of those days the sun will be darkened, and the moon will not give its light; the stars will fall from the sky, and the heavenly bodies will be shaken.

2. Romans 8:19-22 The creation waits in eager expectation for the sons of God to be revealed. 20 For the creation was subjected to frustration, not by its own choice, but by the will of the one who subjected it, in hope 21..that the creation itself will be liberated from its bondage to decay and brought into the glorious freedom of the children of God. 22 We know that the whole creation has been groaning as in the pains of childbirth right up to the present time.

C. Third, all of the Christians saved during the Tribulation who are still alive will be gathered to safety.

Matthew 24:31 And he will send his angels with a loud trumpet call, and they will gather his elect from the four winds, from one end of the heavens to the other.

D. Fourth, all the world will see Jesus Christ appear physically at the same time.

Matthew 24:30 At that time the sign of the Son of Man will appear in the sky, and all the nations of the earth will mourn. They will see the Son of Man coming on the clouds of the sky, with power and great glory.